One of the most fascinating people I’ve had the pleasure of working with is Dr. Story Musgrave (I used to introduce him at public events when I worked for Disney; pictured left at my house with me and my husband.) Story is a six-time shuttle astronaut–he’s the only astronaut to have flown on all five Space Shuttles–a pilot, mechanic, surgeon, poet, artist and author. (I’m quoted in his fascinating biography, “Story, the way of water” written by the very talented Anne Lenehan.)

Perhaps he is best known for his heroic space walk, pictured here, when he led a mission to repair a faulty mirror in the magnificent Hubble Telescope. He was hand-picked by NASA to perform this first-of-its-kind accomplishment because of his, well, perfectionist qualities, his record-setting experience as a jet pilot and his precise skills as a surgeon. “Might be,” I’ve heard him say. “But, I was a farm boy who learned how to operate and repair every piece of farm machinery my family owned. Then I joined the service and learned to fly. I am curious by nature. We all are.”
Whatever the reason, one thing is clear: NASA chose well. The space-walk and repair mission was a success!  The Hubble beamed to us mind-blowing images of the birthplaces of planets, dark matter and galaxies from the early universe. So many in fact that NASA turned to the public to help sort through them. (Join the citizen science project Galaxy Zoo to help scientists classify new galaxies!)
The Hubble Telescope is being serviced in space RIGHT NOW by the crew of Atlantis.This marks the final trip to the Hubble which is expected to continue sending images from the heavens to us through the year 2014, nearly 25 years after its launch. Watch history unfold with live blogging of this FINAL service mission and  video of the Atlantis shuttle crew in space.

To my daughter, Story Musgrave–the man who led the first mission to service the Hubble–was a guy who thought it was hilarious to hold her birthday card upside down six years ago;  to my sons, he’s simply the man who fixed our grandfather clock when he stayed overnight with us during a visit to Philadelphia several years ago. To me, he’s the ultimate  Renaissance man who endured a troubled family history wrought with suicide (read the biography for details); who seeks adventure, embraces new experiences and sincerely appreciates audience Q&A sessions because he “always learns something new and important” from the public. He a true believer in the potential each and every person possesses. When I’ve expressed reservations about my role as the Science Cheerleader (“I have no formal training in science!”) he encouraged me with quips like “what the hell does that mean? Who DOES?!” And, yes, much like the astronauts portrayed by Hollywood, he’s still got an eye for the ladies 🙂 Viva Story Musgrave! 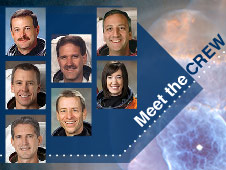 And congratulations to the crew of the Atlantis!
From NASA’s website: “Over the course of five spacewalks, astronauts will install two new instruments, repair two inactive ones, and perform the component replacements that will keep the telescope functioning at least into 2014.”